So, I’ve had this grand idea that I’d get caught up on sleep before the baby gets here.

You know…sleep in during the Summer mornings when there is no school.  Take naps.  Enjoy the luxury of a quiet house with a son who is almost 8 years old.

It turns out that sleeping attracts children like moths to a porch light.  I would get less of a reaction if I was baking cupcakes and passing out free toys.

I haven’t been sleeping so great at night — the baby kicks, I have to pee three millionty times, and I get calf cramps that make me want to punch life.  So the other afternoon, I decided to close my eyes for a half hour or so and take a much needed power nap.

Five minutes in, I smelled something very near to my nostrils.

I quickly identified it as Cheez It breath, which is honestly my arch nemesis.  There really should be a law about brushing your teeth immediately after consuming cheese flavored crackers.

Anyways, I opened my eyes and there was Jon David, 2 inches from my face, just staring.

Of course, I got mad.  And because Trying To Take A Nap Mad equals three times the mad of Normal Doing Daily Activities Mad, it wasn’t pretty.

Turns out, I shouldn’t have even gotten upset.  Jon David was just “checking on me” to “see if I was asleep”.

When he isn’t “checking on me” during naps, he is sneaking in my room early in the morning to wake me up (or as he calls it — snuggle).  Again, I shouldn’t get mad because according to him “I can’t help it that you are so cozy, mom”.

Obviously, mens cluelessness about the fact that sleep often trumps cuddling begins VERY early in life.  Don’t get me wrong — I appreciate that the boy loves a good cuddle, but my goodness I am exhausted.

I wish there was a way to sleep while pretending to do chores, because that would keep my son away for sure.  Especially if it involved laundry or toilets.  Maybe I’ll close myself in his room and play a recording that sounds like picking up toys. 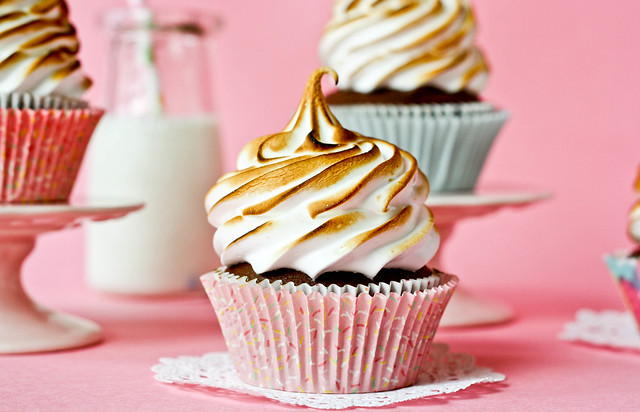 Since the nap thing isn’t quite working out for me, I decided to make better use of my time and whip up some cupcakes.

Chocolate Cream Pie has been a favorite of my husband’s for years, so I’ve had it in mind as a cupcake flavor for awhile. 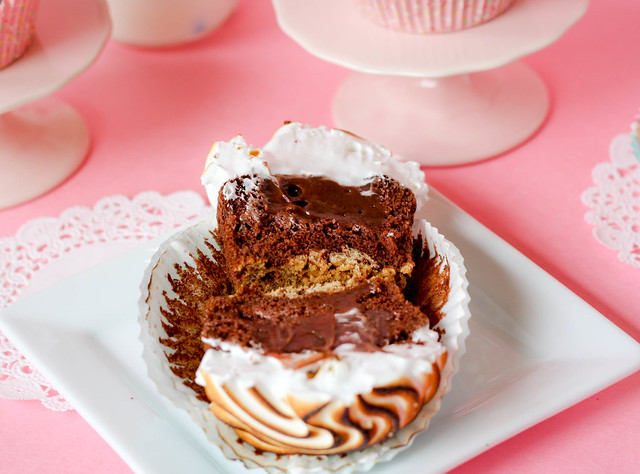 Chocolate cupcakes with a graham cracker crumb base, filled with chocolate pudding, and topped with a sturdy meringue.

I’ll be honest — it’s so crazy hot here, my air conditioner can’t keep up.  Combine that with my pregnancy, and sometimes getting in the kitchen is unappealing.  So…I took the easy route on these — Devil’s Food cake mix and instant pudding all the way.  If you want to go a homemade route, use your favorite scratch cake and pudding recipes…but I loved that I could throw these together easily but they still came across as very impressive.

It’s too hot to be spending hours in the kitchen, for reals.

If you are going to pipe the meringue on HIGH like mine, you will probably want to double the meringue recipe. If you don't want to use that many eggs (it's a LOT), just pipe or spoon on a smaller amount...still impressive!!

If you need a good kitchen torch, something like THIS works great. I rarely use my torch, but it’s great for browning cooked meringues (which hold up better, pile on high, and don’t shrink or weep), and I’m always glad to have it when I do use it!!

Enjoy and have a very happy Monday!!